A Wild Bird and a Cultured Man

The Common Eider and Homo Sapiens: Fourteen Centuries Together 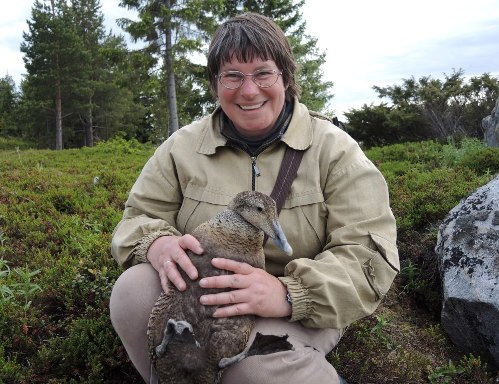 The Common Eider (Somateria mollissima) has been an integral part of Man’s life for many centuries. It was a source of meat, eggs, skins and down, served as a subject of research and a source of inspiration. Humanity’s knowledge of the eider was written down and embodied in items or technologies. For no less than one thousand years humanity has been writing one giant saga about the eider. The “co-authors” of this saga lived in different times or countries, and spoke different languages, thus making it impossible to put parts of the full eider story together. For this reason the unique story of people’s interaction with the eider remained unread.

For the first time ever this book brings together all the separate fragments of the eider saga, while its popular style and the fact that the book will come out in both Russian and English will make it accessible to the whole world. The book will be of interest to anyone connected one way or another to the eider: biologists, farmers, hunters, ecologists, buyers and sellers of eider down items, as well as everyone who is interested in birds and the relationship between Man and Nature.

In order to track the entire story of the relationship between humans and the eiders the author has looked through over five hundred published and archived sources starting from the 9th century; gathered more than 700 archive and modern photographs; participated, for several years, in field work in eider nesting colonies in the Kandalaksha Nature Reserve and on eider farms in Iceland. The author has involved over two hundred people and over 10 museums from Russia, Iceland, Norway, Denmark, Sweden, Israel, USA, Scotland, Finland, Great Britain, France, Greenland, Canada and Estonia in her work to collect and process information, and to select illustrations for the book. In actual fact the book has become a large international collaboration project.

The Circumpolar Seabird Expert Group of Conservation of Arctic Flora and Fauna (https://www.caff.is/seabirds-cbird/) and the Russian Society for the Protection and Study of Birds (http://birdsrussia.ru/) found the project relevant, promising, and deserving of all-around support.

The author, Alexandra Goryashko, is a writer and a historian of science. She has been associated with the Kandalaksha Nature Reserve that specialises in the protection and study of the eider for over 35 years. She has published over 170 articles, about 40 of which are about the eider.

Translation into English is by P. Voytinsky.

Editing of the English translation is by David Leslie Urion.

The book contains 18 chapters broken down into five parts. The total number of pages is approximately six hundred.

Part 1. How the eider gets along without Man

The biology, ecology, and behaviour of the eider in nature. What’s uncommon about the Common Eider? 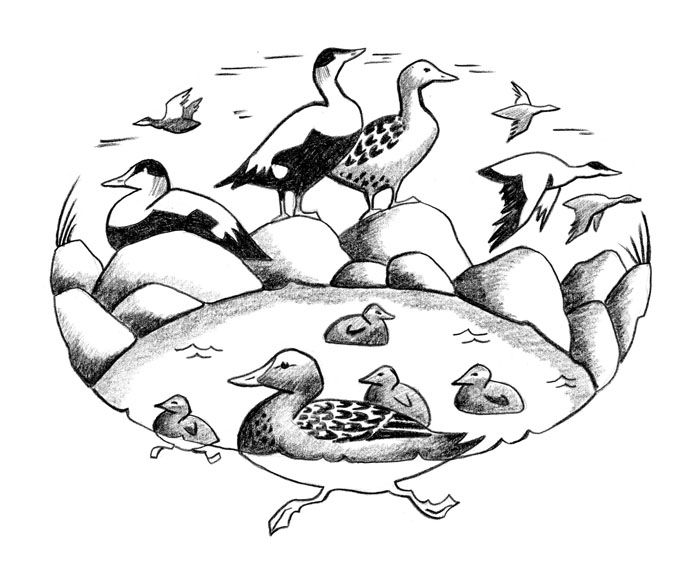 Part 2. The Common Eider and its Holy Patron. The starting point

The legend of St. Cuthbert, the Patron Saint of eiders (Northern England, 7th century). An analysis of sources for the origin of the legend and the latter’s degree of credibility. 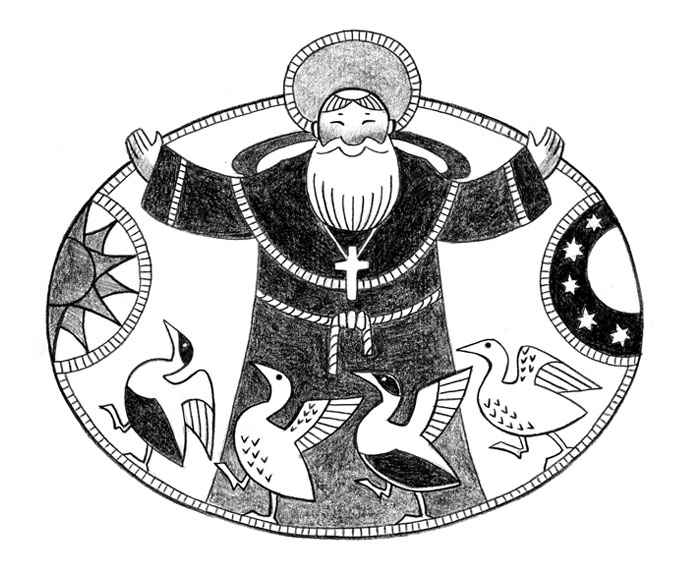 Part 3. The eider living with Man 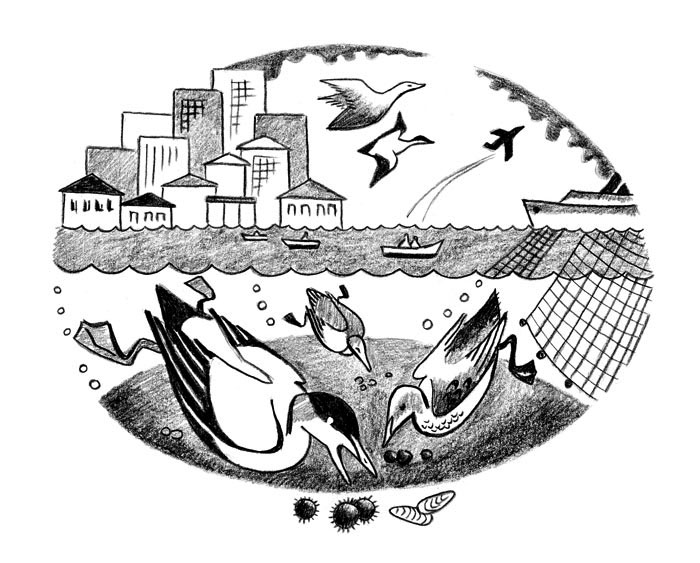 3.1. When did Man become acquainted with the eider?

Archeological findings; first literary sources; the acquisition of its name by the eider in various languages.

3.2. Evolution of eider in scientific literature

The formation of the idea of the species in ornithological literature (17th-20th century).

Peculiarities of eider down structure; the history of its study; unsolved mysteries.

3.4. Eider is more than just valuable down

The significance of the eider as a food resource. Historic information on eider hunting and the collection of its eggs. Present-day eider hunting laws.

3.5. The beginning of symbiosis

How much down was collected in Russia in the past and how was it used? Myth and reality.

3.7. First attempts at eider protection in the non-eider world

3.8. Eider farming in the USSR

Attempts to establish eider farms in the USSR: The “Seven Islands” and Kandalaksha Nature Reserves; Novaya Zemlya (the 1920s to the 1990s).

3.9. Why are there no eider farms in Russia?

How the USSR eiders lived outside nature reserves. Economic and social reasons that make the appearance of eider farms in Russia highly unlikely.

Biological, social and economic conditions for establishing eider farms. The phenomenon of Icelandic and Norwegian eider farms; is it possible to replicate their experience?

3.11. Modern eider farms and the down trade

The eider farms of Iceland, Norway, and Canada. The development of eider down cleaning technology. The worldwide eider down market.

3.12. The beginnings of the eider world

Greenland, North America, Chukotka. The traditional uses for the eider, eider clothing, methods of hunting. The Inuit and Chukcha knowledge about the eiders.

The story of studying the eiders in the USSR; how the eiders nesting in the Kandalaksha Bay are counted every year. The eiders in zoological collections. Eider bibliographies.

3.14. Eider as a domesticated bird

Raising the eider chicks and keeping the eiders in captivity: from the 19th century to the present day. 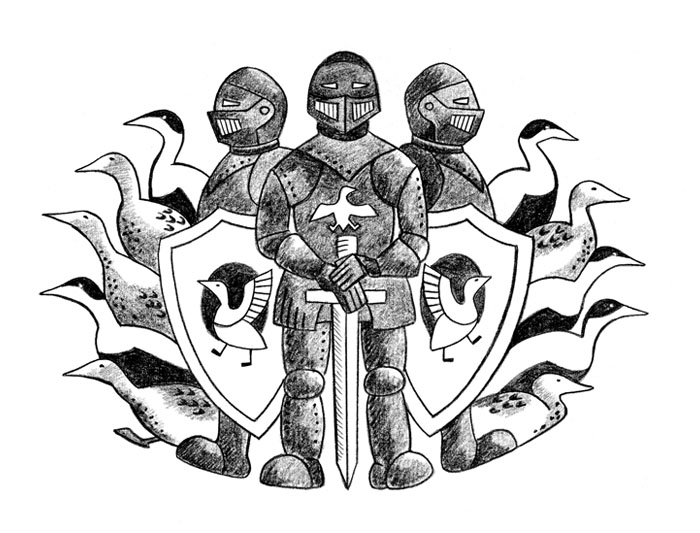 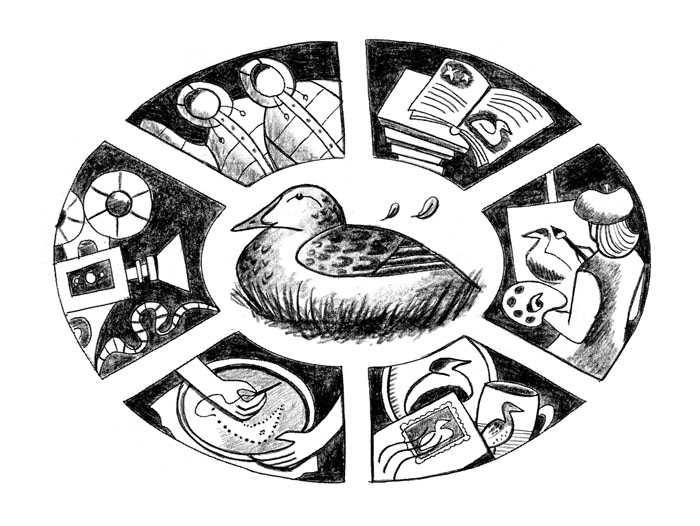 The eiders in fine art and literature. Illustrations have been provided by artists, sculptors and museums of Sweden, Finland, Great Britain, Denmark, USA, Canada and Russia.

The history, exposition and locations of eider museums in Norway and Iceland.

5.3. The eider and eider down in the lives of real or literary figures

Eider down in the clothing of polar explorers and the equipment of mountain climbers; eider blankets of Immanuel Kant and the Moomins, and other amusing stories.

The most common misconceptions about the lives of the eiders and eider down.